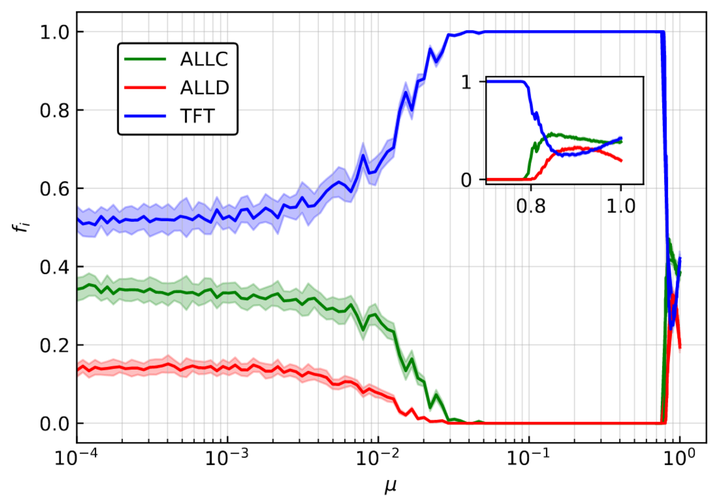 With the recent launch of the James Webb Space Telescope astronomers are closer than ever to detecting signs of life in the Universe. Directly related to this endeavour is the one pursued by scientists striving to explain how life itself has appeared on our planet, and by extension could also emerge on remote worlds. One key element which is likely to take part in this universal description of the transition from non-life to life is the concept of cooperation: if simple molecules are to be regarded as the building blocks for further complexification, then they must act in a synergistic manner towards the construction of unified systems where they each play a part cooperatively.

When we think of a natural Darwinian evolutionary system however, the first thought that crosses our mind is not necessarily cooperation. In nature, organisms are often in direct competition for resources, and life specializes in occupying and defending niches against invaders. Nevertheless, several forms of cooperation in natural contexts have evolved through history—the cells of an organism clearly do not compete, fungi take part in mutualist interactions with other lifeforms and so on, all the way up to human societies.

If explaining cooperation in higher level organisms requires that we invoke concepts such as kin selection, which already assume a certain level of biological complexity, explaining how cooperation emerges in the simplest entities is in contrast much harder. Considering the limiting case of origin of life theories which hypothesize that biology originated with small networks of auto-replicating molecules, for instance, then how can we explain cooperation between these networks? This is an important question, and is precisely what motivated some of our recent numerical simulations (Champagne-Ruel and Charbonneau, 2022). Letting agents evolve on a virtual 2D environment behaving either in a cooperative or parasitic manner, we gradually implemented elements expected in a prebiotic setting: we began with simple populations of agents that could either cooperate or not, but made “mistakes” some fraction of the time—thus defining an error rate—a reflection of the fact that natural environments conducive to the origin of life are likely to be subject to random perturbations. Unsurprisingly, exploitative agents often dominated—a well-known result in evolutionary game theory for this type of simulation. However, by making the agent’s error rate heritable—hence making the simulations closer to a Darwinian environment—we noticed that one specific species emerged much more easily: the agents that reciprocated their opponent’s cooperative behavior now succeeded much more often, an already striking result. But an even more surprising outcome resulted from the integration of a variability in those error rates—in analogy with biological variability such as mutations when organisms reproduce: for a wide range of parameter values in the model, cooperators now suddenly invaded the system in almost every simulation. Thus, as soon as they are placed in an evolutionary environment that includes heritability and variability, cooperators can thrive—even when, counterintuitively, this environment is strongly competitive and faces important external perturbations.

Those unexpected results suggest a conclusion which is twofold. First, they further substantiate the claims put forward by previous work on the origin of life that the transition from the non-living to biology is in many ways similar to the phenomenon of phase transition in physics: like the sudden transition undergone by water when it reaches the boiling point, the cooperative takeover required for life to emerge would have consisted in a dramatic event unfolding over a very short period of time. Second, our results suggest that even in the absence of complex genomes and behaviorally complex animals, cooperation not only emerges spontaneously, but does so in a robust manner and quite easily—even in environments subject to perturbations. Moreover, if cooperation emerges so readily in nature, this might in return suggest that life could also emerge in adverse environments—as could be detected in the near future with the James Webb Telescope. Our conclusion for astrobiologists could thus be summed as follow: leave no stone unturned, because natural cooperation (and thus, life!) could come up from anywhere, even the most unwelcoming environments.